Can vitamin C improve my body health and how much to take per day? 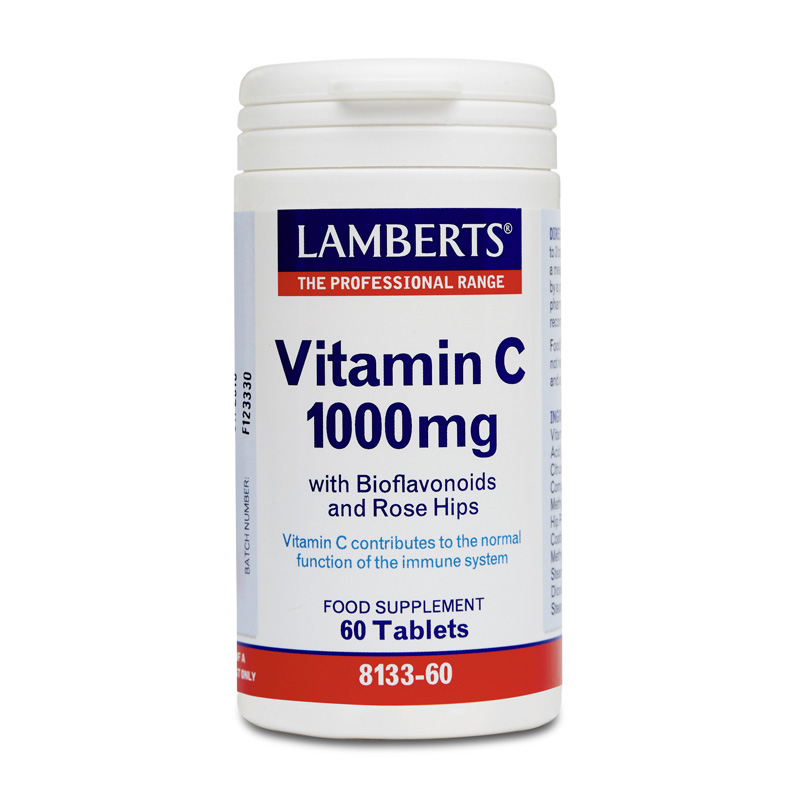 Vitamin C, a vitamin that is soluble in water, is also referred to as L-ascorbic acid. You can find it naturally present in several foods and artificially added to other foods. Vitamin C is also commonly available as a dietary supplement and is likely one of the most affordable and popular dietary supplements out there. Most animals are capable of synthesizing vitamin C endogenously, whereas humans cannot and this makes it necessary for us to get vitamin C through our diets. 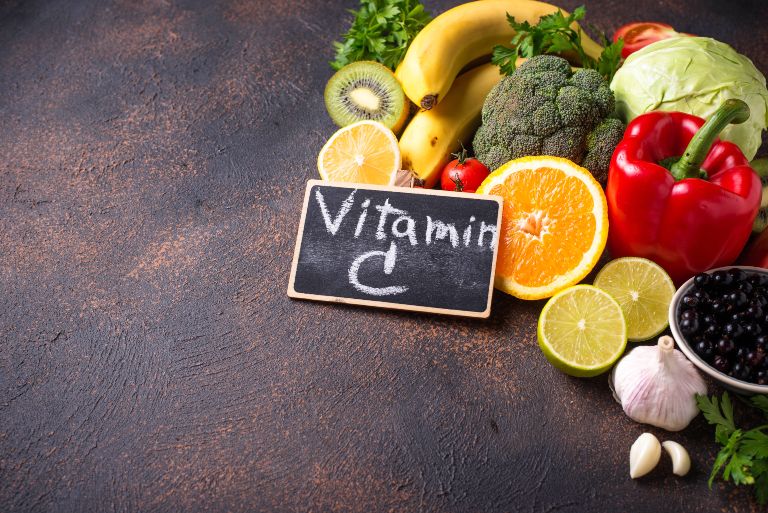 What Is Vitamin C Good For?

There are a whole lot of reasons why vitamin C is important, and it’s actually one of the most important vitamin supplements. Vitamin C isn’t like other vitamins, and our bodies don’t produce it on their own, making it essential to get it through our diets.

Vitamin C is a powerful antioxidant that works to fortify our bodies’ natural defenses against disease by keeping our cells safe from dangerous molecules known as free radicals. Free radicals bring about a state called oxidative stress when too many of them accumulate. Many chronic diseases, like heart disease, for example, have been linked directly to oxidative stress which makes it an imperative state to avoid.

Studies have shown that the consumption of vitamin C increases antioxidant levels in the blood by up to 30%, assisting the body’s natural defense system in fighting inflammation.

Vitamin C might also have the ability to reduce levels of HDL and LDL cholesterol as well as triglyceride levels which are all risk factors for heart disease.

Vitamin C might also help prevent attacks of gout and lower blood uric acid levels. A type of arthritis, gout is an inflammation of the joints and is a very unpleasant and painful condition. It involves swelling and sudden pain attacks and is most prominent in the big toes. The symptoms of gout show up when the blood has too much uric acid, which is waste produced by the body. When levels of uric acid get too high it crystallizes and sits in the joints. Studies have shown that vitamin C helps lower levels of uric acid in the blood, consequently protecting our bodies from gout.

Another important nutrient for our bodily functions is iron which plays a key role in producing blood cells and carrying oxygen from place to place in our bodies. Vitamin C helps convert forms of iron which the body has a hard time absorbing (such as iron from plant-based diets) into a more easily absorbed form of iron, making vitamin C an essential part of our diets.

Vitamin C supplements are often taken to help boost immunity since it is involved in quite a few parts of our immune systems. It fuels the production of phagocytes and lymphocytes, which are white blood cells. These white blood cells work as protection for our bodies against infections. In addition to that, vitamin C also enables white blood cells to carry out their purpose more effectively while shielding them from any harmful molecules that could prove dangerous, like free radicals.

Our skin also heavily relies on vitamin C to keep up its defense system. Vitamin C gets transported directly to our skin where it works as an antioxidant to fortify our skin’s barriers. It has even been shown to improve the healing time of surface wounds. 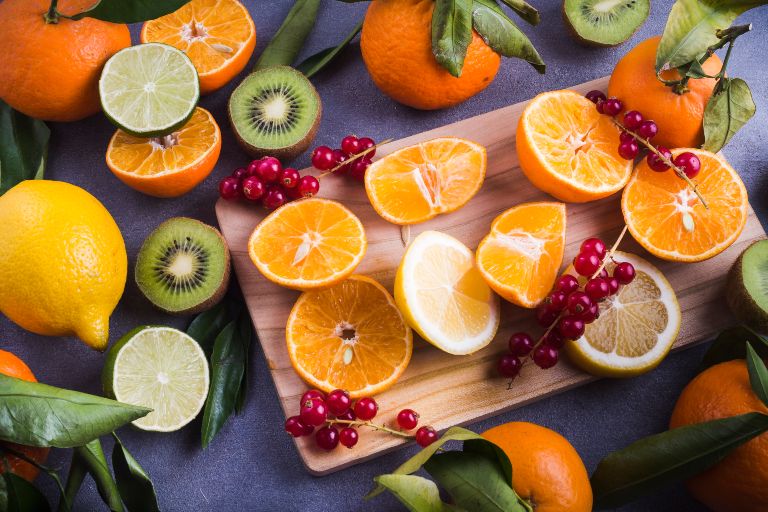 Why Do We Need Vitamin C?

A lot of us have heard of vitamin C and can vaguely say that it’s something that makes us “healthier,” but why is vitamin C important?

Our bodies need vitamin C in order to biosynthesize certain neurotransmitters, as well as L-carnitine and collagen. It’s also a component in protein metabolism. Connective tissue, which plays a big role in how wounds heal, uses collagen as one of its essential components.

Many people take vitamin C to calm symptoms of the common cold, and it works. Taking vitamin C supplements will not change how frequently cold appear in a healthy population, but it will decrease an individual’s likelihood of catching a cold by up to 50%. On a larger scale, it won’t prevent a population from catching colds, but it will decrease how long the cold lasts by 8-14% when taken regularly. Getting between 5-10g of vitamin C daily is said to be the most effective dosage, but further research is required to see exactly how accurate this claim is.

As mentioned above, vitamin C is a physiological antioxidant which can regenerate alternate antioxidants already present in the body, like alpha-tocopherol or vitamin E. Since vitamin C limits the damaging effects of free radicals with its antioxidant characteristics, research is presently underway to find out if vitamin C can be used to hinder the development of cardiovascular disease, certain cancers, and a few other diseases where oxidative stress is a factor.

Vitamin C’s role in immune function is also very important since it improves how we absorb nonheme iron, which is the type of iron found in plant-based food.

Due to the way vitamin C hinders free radicals, it can even have an impact neurologically and has been listed as a useful component against bad moods and depression. It can also help keep up testosterone levels through shielding the testes against oxidative stress.

Vitamin C has many positive effects on the body, and if taken daily it can have a positive influence on your health in general. Getting the right amount of vitamin C daily through food, drinks or supplements can make all the difference for your health on many levels. 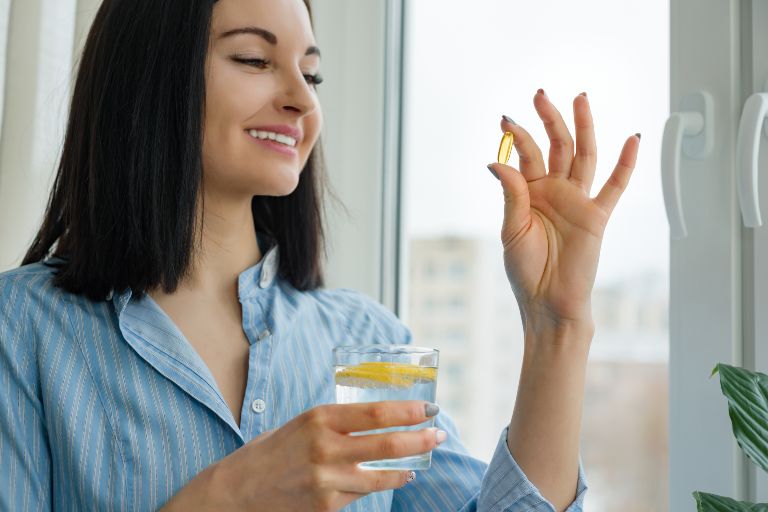 How Much Vitamin C Per Day?

So we’ve covered how vitamin C can help our health, and as we’ve seen, it plays a role in quite a few aspects. But the next thing to ask is how much vitamin C to take per day? And can you overdose on vitamin C?

First of all, vitamin C has very low toxicity and won’t cause any serious negative effects when taken in high dosages. If taken in excess, however, it has been known to cause several unpleasant symptoms; like abdominal cramps, diarrhea, nausea, as well as other gastrointestinal disturbances since unabsorbed vitamin C causes the osmotic effect when sitting in the gastrointestinal tract.

Some research suggests that getting too much vitamin C will raise the possibility of uric acid excretion and can increase urinary oxalate, both of which have the possibility of contributing to the formation of kidney stones, namely in people with renal disorders. Research is still not solid enough to completely support these claims.

There is a theoretical concern that vitamin C might cause an overload in iron absorption because of how it enhances nonheme iron from plant-based food sources. It doesn’t seem to be a concern in healthy people, but in those with hereditary hemochromatosis getting too much, vitamin C might trigger an iron overload resulting in tissue damage.

Certain conditions can cause vitamin C to function as a pro-oxidant, which could potentially contribute to oxidative damage. These cases are very rare, and research is not conclusive enough to make a solid tie between vitamin C and high oxidative stress levels. It usually works in reverse, as an antioxidant.

The recommended amount of vitamin C intake varies with age, and smoking also makes a difference in how much vitamin C you should take. Smokers should get 35mg more per day than those who don’t smoke.

Following is a shortlist of the adequate intake of vitamin C daily depending on age and sometimes gender. 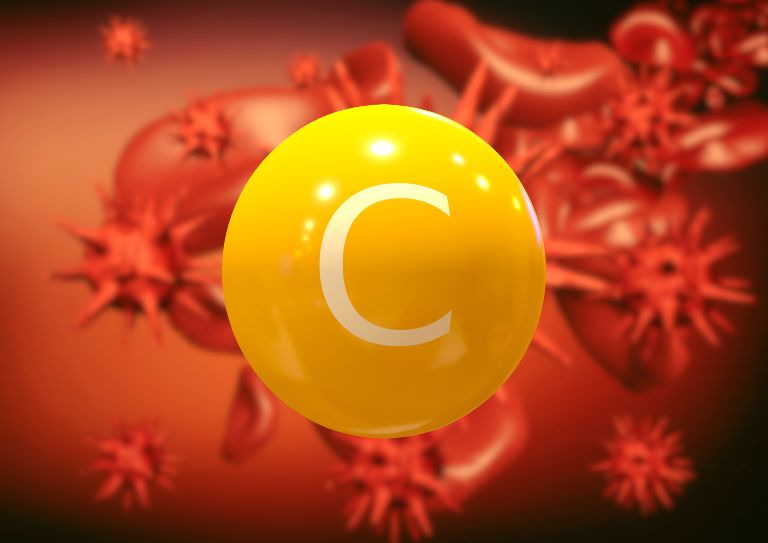 The benefits of vitamin C are many. As we’ve seen above it can perform all sorts of functions, from reducing oxidative stress to boosting our bodies’ immunity.

The best sources of vitamin C in food definitely come from fruit and vegetables. Citrus fruits, tomatoes, and potatoes are all high in vitamin C. You can also find great vitamin C content in Brussels sprouts, kiwis, Green peppers, broccoli, strawberries, and cantaloupe.

Sometimes prolonged storage and cooking can reduce the vitamin C content of food since ascorbic acid can be destroyed by heat and is also water-soluble. Microwaving or steaming can help decrease the amount of vitamin C lost through cooking, although many times fruits and vegetables can be eaten raw which maintains the full vitamin C value.

Following is a list of the foods that provide the best sources of vitamin C and how many milligrams of vitamin C per serving they contain:

Besides food, you can also get vitamin C from dietary supplements. These usually have vitamin C in an ascorbic acid form which is equal in bioavailability to that of foods or drink like broccoli or orange juice where ascorbic acid occurs naturally.

Through monitoring how much vitamin C you get each day you can help boost your immune system, fight disease, and keep yourself fit and healthy. Whether you get it through natural sources, like food and drink, or dietary supplements isn’t important. But what is important is that you’re getting sufficient vitamin C every single day so that you can keep your body safe from sickness and in tip-top condition.

See your doctor or dietary specialist for any further advice on how to get the appropriate amount of vitamin C for your specific situation.

Tags:
Vitamins
Newer What are the benefits of Ashwagandha for men and women?
Back to list
Older Vitamin D: Benefits, Deficiency and Dosage

END_OF_DOCUMENT_TOKEN_TO_BE_REPLACED

What are the benefits of chewable vitamins

Vitamin supplements are a great way to get those greatly needed vitamins outside of your diet and are a very popular choice all over th...

END_OF_DOCUMENT_TOKEN_TO_BE_REPLACED

What makes Pure Encapsulations such a trustworthy vitamins and minerals brand?

From Digestive Enzymes Ultra With Betaine HCI and Daily Support Formula to Vitamin D3 Liquid and Zinc 30, you may have noticed that we ...