Hawaiian spirulina is one of the most popular supplements in the world. It’s chuck-full of antioxidants and nutrients that can be beneficial for both your physical and mental health. A single tablespoon (or 7 grams) of dried spirulina has:

Also contained in spirulina is thiamin, niacin, folate, riboflavin, as well as vitamins A, B-6, and K. Gram for gram, it could just be the food with the most nutrients on earth.

It has been known for a long time that spirulina has the ability to strengthen the body’s immune system, leaving those who use it at a far lower risk of catching colds, flus, or any other contractible diseases. The use of spirulina helps speed up recovery from sickness and quicken the healing of wounds all through cell regeneration, which it actively promotes.

If you’re looking to improve the health of your eyes, spirulina is a great supplement to take. It’s especially rich in vitamin A, which is a vitamin that is particularly vital for maintaining healthy eyes. You may know how carrots are constantly promoted for keeping your eyes healthy. Well, that’s because they, too, are a powerful source of vitamin A. A single gram of spirulina, however, has up to ten times more vitamin A that a gram of carrots, making it the best possible way to get your necessary vitamin A.

Spirulina is also one of the best sources of GLA (Gamma-linolenic acid), which is one of the strongest anti-inflammatory agents that exist. GLA is very useful for women, as it can help to make the symptoms of PMS less severe. It’s also a great supplement for pregnant women, as a gram of spirulina has over 26 times the amount of calcium contained in a gram of milk, which is already a great source of calcium.

Spirulina works to improve the digestive system by easing the passage of waste, thus freeing up the entire system from a good deal of stress. Along these lines, it also helps improve how well our bodies absorb dietary nutrients while promoting healthy bacteria in our digestive systems.

There is a high concentration of chlorophyll in spirulina, chlorophyll being one of the most powerful detoxifying agents that nature has to offer. Chlorophyll helps remove toxins from our blood, making it an excellent detoxifier. It’s especially good for those going through radioactive therapy since it binds to radioactive isotopes and heavy metals.

Spirulina has been known to decrease “bad” LDL cholesterol and triglycerides (a type of fat) while increasing “good” HDL cholesterol. These functions work toward keeping our bodies free from the risk of heart disease, which is the leading cause of death in the world.

There is even evidence to suggest that spirulina has properties that help fight cancer, particularly oral cancer. A study in India took 87 patients with precancerous lesions, or oral submucous fibrosis (OSMF) in their mouths, and put them on spirulina. 45 percent of these patients had their lesions disappear.

Spirulina could even be useful against anemia. Anemia has several different forms, the most common of them being the reduction of hemoglobin (red blood cells) in the blood. Anemia leads to prolonged feelings of fatigue and weakness.

Being high in protein and having powerful antioxidant properties, spirulina can be an excellent tool to improve muscle strength and endurance. Proteins build strong, lean muscles, while the antioxidants help repair oxidative damage to muscles which causes fatigue.

There’s a whole lot that spirulina is useful for and there are various ways of taking it. No downsides to taking spirulina have been found as of yet, although taking large quantities of it would be a waste since the body is only able to utilize a certain amount. Consulting a dietician or doctor would be advisable to find out what would be the best dosage of spirulina for your specific situation. 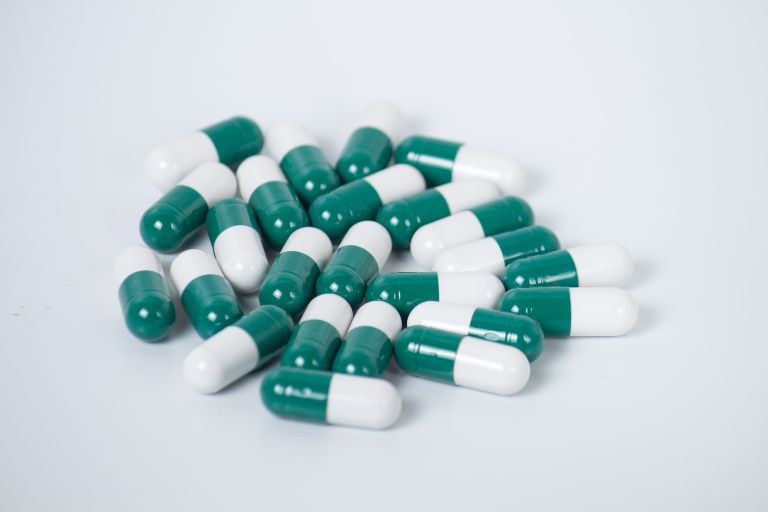 So we’ve covered a lot of the benefits of spirulina, and we know it has a lot of health benefits, but what actually is spirulina? Many people automatically assume that it must be an herb due to all of its nutrients, but as a matter of fact, it’s not! It’s actually a type of cyanobacteria, a family of single-celled microbes that are commonly known as blue-green algae. Cyanobacteria can use photosynthesis to make energy from sunlight, just like plants. Spirulina can be found in both freshwater and saltwater rivers, lakes, and ponds. It is commonly known to be one of our planet’s most nutritionally well-rounded superfoods since it works to assist pretty much every bodily function and organ.

Spirulina used to be consumed many, many years ago by the ancient Aztecs. It actually began making its way back into popularity when NASA proposed that they could even grow it in space.

Spirulina can be found in several different forms, such as powder, tablets, capsules, and even juices. The powder can be a nice addition to a smoothie.

When it comes to dosing spirulina and how much you should take and how often you should take it, there is still not enough scientific data to provide a specific answer. Researchers have done several studies on different fronts where varying amounts were used. For example, in studies on the effects of spirulina on persons with high cholesterol, the best results were found by taking between 1 and 8 grams daily for between four weeks and six months. On the other hand, when studying its effects on type 2 diabetes, the best results were found when patients would take a single gram two times a day for a period of two months. All in all, the right dose for your specific situation will depend on several factors, including your gender, age, and medical history. It would be best to consult a professional physician to get personalized advice for how much spirulina would fit your situation. 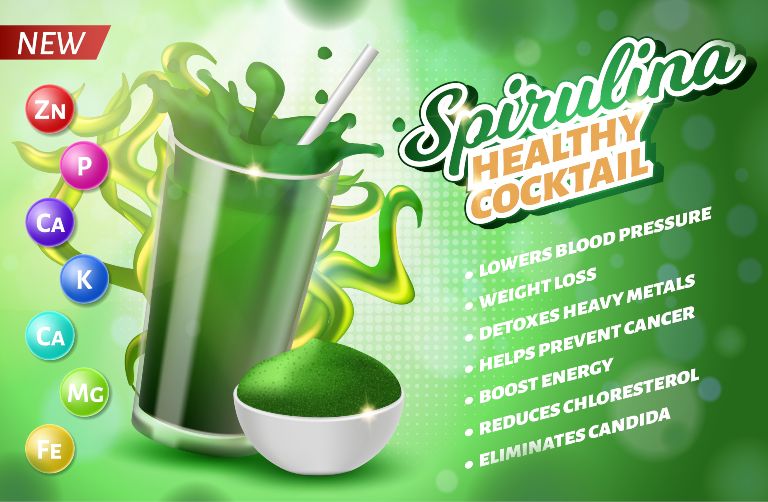 If you’re looking to lose a couple of extra pounds, then adding spirulina to your diet can be an excellent catalyst for losing weight. It’s a food that is low in calories, with one tablespoon of spirulina containing only 20 calories. Consuming food that’s low in calories is one of the surest ways to lose weight because it helps create a negative energy balance. It’s an excellent ingredient to add to a morning smoothie or juice. A tablespoon of spirulina powder in your glass of water, smoothie, or juice is just the right amount. You can also add a tablespoon of spirulina powder to your homemade salsa, curry, stir-fry, or even salad. It can also be used as an ingredient in pastries, cakes, or homemade energy bars. Add anywhere from half a tablespoon to a whole tablespoon to your cooking.

It’s not only low in calories but also high in protein, with around 60% of spirulina being made up of protein with every essential amino acid. Proteins digest slower than simple carbs and help build lean muscle, especially when paired with a good workout routine. It is a very popular protein source for vegans and vegetarians as well, and if you are a vegan or vegetarian and haven’t heard of spirulina, you should give it a shot!

It’s also incredibly rich in nutrients, containing vitamins C, B1, B5, B6, and E as well as minerals like manganese, zinc, and copper. With all these minerals, enzymes, vitamins, and dietary fibers, it acts as an aid in digestion, removing toxins, metabolism, and preventing the absorption of fat.

Since spirulina contains the amino acid phenylalanine, it can be used as an appetite suppressant. Phenylalanine stimulates the secretion of cholecystokinin, which is what suppresses the appetite.

Spirulina is a well-rounded superfood with multitudes of benefits and is definitely a good addition to anyone’s diet. If you’re looking for specific instructions on how much spirulina you should take for a specific condition, it’s best to consult your doctor or physician to get personalized info for your situation.

Tags:
Antioxidant, Immune
Newer What are the benefits of chewable vitamins
Back to list
Older What is a Good Blood Sugar Level?

Tips For Staying Healthy & Caring For Your General Wellness During Lockdown

For many, lockdown has caused a lot of stress, worry and anxiety, with many uncertain about their job security, catching coronavirus an...

END_OF_DOCUMENT_TOKEN_TO_BE_REPLACED

The Immune System – It is a System that You Can Improve

Keeping the immune system intact is a very important part of living a healthy life. Particularly in this time period with the spread of...

END_OF_DOCUMENT_TOKEN_TO_BE_REPLACED

You may have heard of Ginkgo and seen it listed as an ingredient in all sorts of health products and foods, but many people don’t know ...

END_OF_DOCUMENT_TOKEN_TO_BE_REPLACED

Whatever your health, circumstances or stage of life, the colder months are a time when you are likely to appreciate a little extra sup...